A fitness coach has revealed how she cleared up her chronic psoriasis with the help of five skincare products and dietary and lifestyle tweaks.

Kath Chetner, 26, from Sydney, said she had always had clear skin – until one day when she woke up to discover she had ‘not only one red dot on my body, but many’.

Overnight, the 26-year-old developed psoraisis – which would go on to plague Kath’s health for months until she found a skincare range that helped to get rid of it. 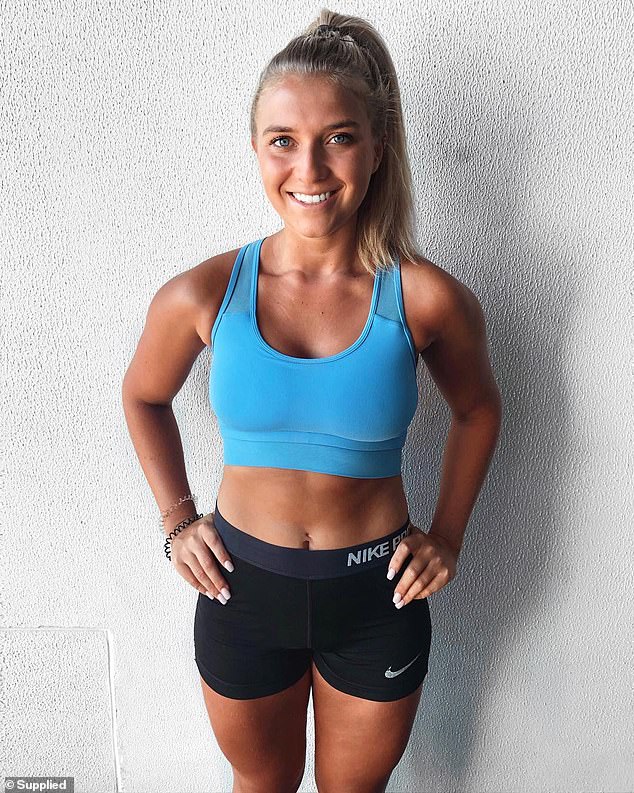 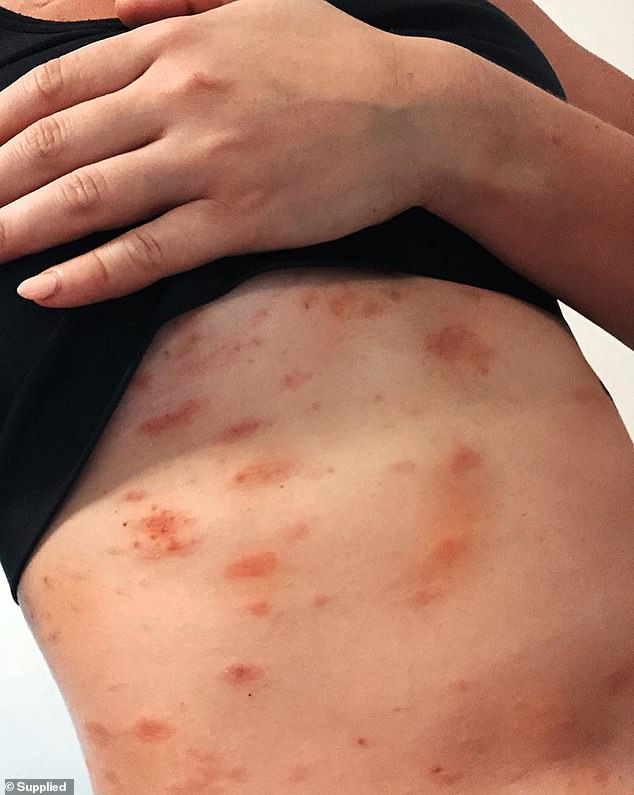 Kath Chetner, from Sydney, said she had always had clear skin – until one day when she woke up to discover she had ‘not only one red dot on my body, but many’ (pictured: her psoriasis)

What are the major symptoms of psoriasis?

‘[When it first happened], I thought I had slept walked through a beehive or something,’ Kath said.

‘I was so unsure as to what had happened overnight, that I started to question whether it was my clothes, had I had a reaction to a bathroom or kitchen product, did I have Chickenpox or was it something I had eaten?

‘I can’t admit I was even that concerned, until a few days when more started to form, but worse.’

What the 26-year-old didn’t realise was that her torso was in fact breaking out in the chronic auto-immune disease psoriasis.

‘It wasn’t long before the itchiness started to drive me insane.’ 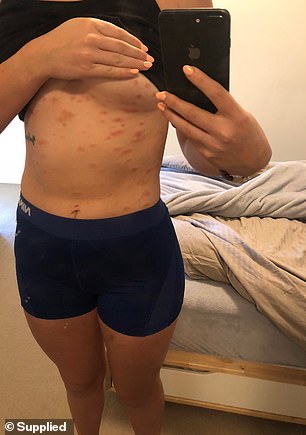 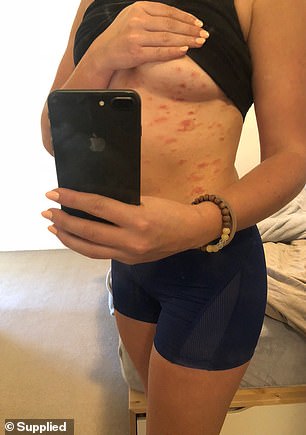 At first, the 26-year-old (pictured with her psoriasis) said she didn’t know what was wrong with her – she thought she’d walked through a beehive or had chicken pox or something

* Psoriasis is a chronic auto-immune condition that causes the rapid buildup of skin cells. This buildup of cells causes scaling on the skin’s surface.

* Inflammation and redness around the scales is fairly common. Typical psoriatic scales are whitish-silver and develop in thick, red patches. Sometimes, these patches will crack and bleed.

* Psoriasis is the result of a sped-up skin production process. The typical life cycle of a skin cell is one month.

After Googling her symptoms, Kath discovered that psoriasis could be the cause of her dry skin and itchiness.

As well as being brought on by genetics, it can also be prompted by things such as ‘a poor immune system, bad gut health, chronic stress and infections and bacteria,’ Kath said.

Kath discovered that her own psoriasis – Guttate psoriasis – causes little pink spots, often on the torso, arms and legs.

‘As it developed, I started to become extremely self-conscious,’ the 26-year-old recalled.

‘I love training in the gym and always used to in shorts and a singlet.

‘I ended up wearing a jumper to cover up my arms and legs from other people.’ 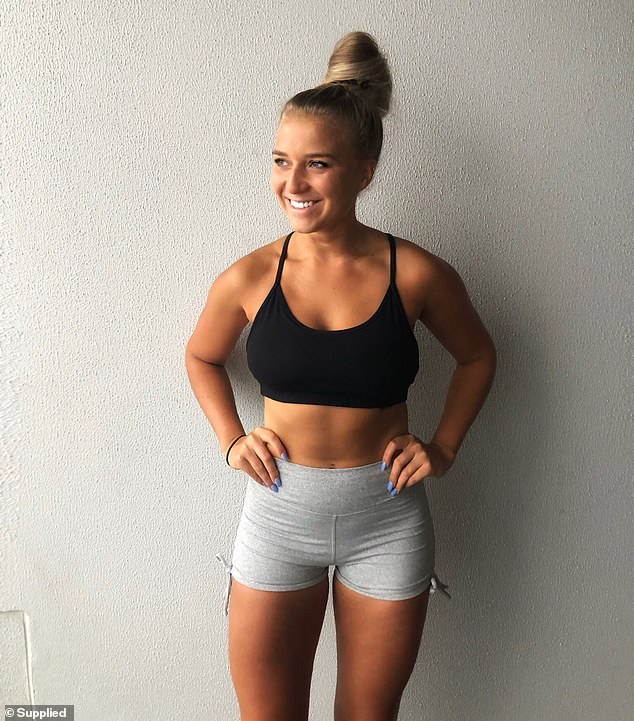 After Googling her symptoms, Kath (pictured after having got rid of the psoriasis) discovered that psoriasis could be the cause of her dry skin and itchiness

The psoriasis was also present on her face – meaning Kath felt forced to wear makeup most days.

‘The patches weren’t red, but they were lumpy and dry so you could tell something was there on my face,’ she said.

‘Makeup was the worst thing for it, and no creams that I had eased the reaction.’

Eventually, the 26-year-old knew she couldn’t go on as she was – and so, with the help of a doctor, she made some lifestyle changes. 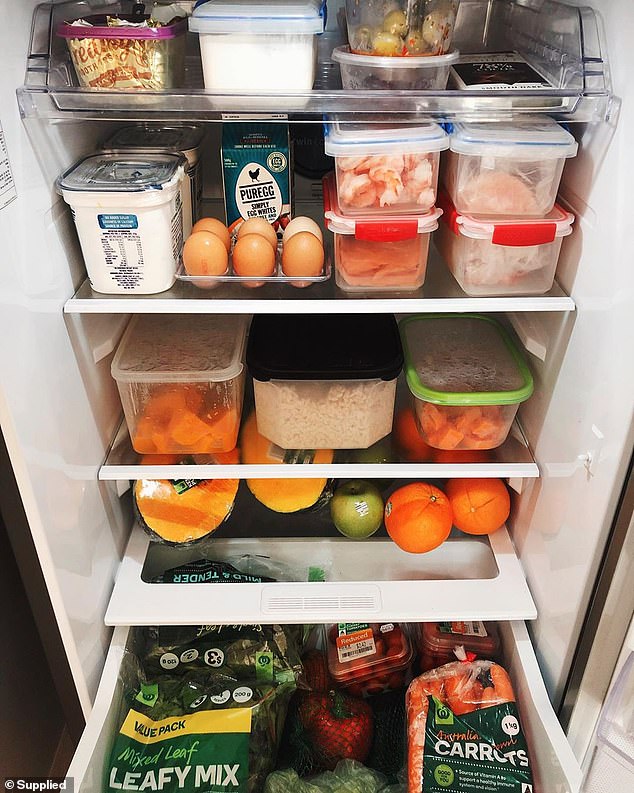 Kath has since made some lifestyle changing, including cutting artificial ingredients from her diet, as well as gluten and dairy (pictured: inside her fridge)

How has Kath helped her psoriasis?

* She has adopted a healthy diet and cut gluten and dairy from her diet.

* She has no antibiotics.

* She ensures she gets a little sun exposure each day.

* She also ensures she gets the minerals she needs – zinc, magnesium, copper, antioxidants and pre and probiotics.

* She uses the natural skincare range, SkinB5 – and five products in particular.

‘A healthy diet, strong immune system, a healthy and functioning gut, little to no antibiotics or artificial ingredients and a little sun exposure each day have all helped me,’ Kath said.

‘Another thing I’ve learned is that it helps to use products that aren’t tested on animals, that don’t include sulphites and are paraben-free.’

When the 26-year-old started to use organic skincare, she said she noticed a huge difference in her skin within a week.

‘The prime ingredients I always look for now are the vitamins B5, C, E, D and A, as well as the minerals zinc, magnesium, copper, antioxidants and pre or probiotics.’

Kath has also cut gluten and dairy from her diet, which she said has helped with the itchiness and red lumps. 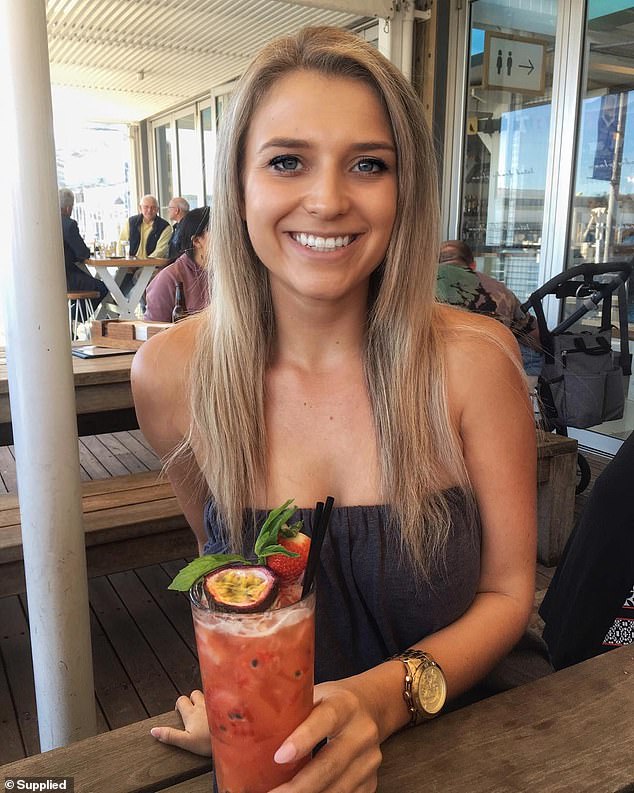 Alongside diet and lifestyle changes, Kath (pictured) said discovering the Australian skincare range, Skin B5, has been hugely helpful – she now swears by five particular products

Which products does Kath use?

Alongside diet and lifestyle changes, Kath said discovering the Australian range, Skin B5, has been hugely helpful.

Each of these things do different things, but have meant she feels more confident without makeup again.

‘I find this range works wonder for my psoriasis,’ Kath said.