Friends character Monica Gellar was known for being pedantic, and she wouldn’t be happy about the Courteney Cox Challenge taking off with the wrong spelling.

Actress Courteney, 55, started a craze among French social media users this summer when she posted a video of herself seemingly jumping from her pool in reverse.

The clip has inspired hundreds of fans to make similar videos, recording themselves jumping in the pool and then playing it back backwards — except most of them have misspelled her name in the trending hashtag. 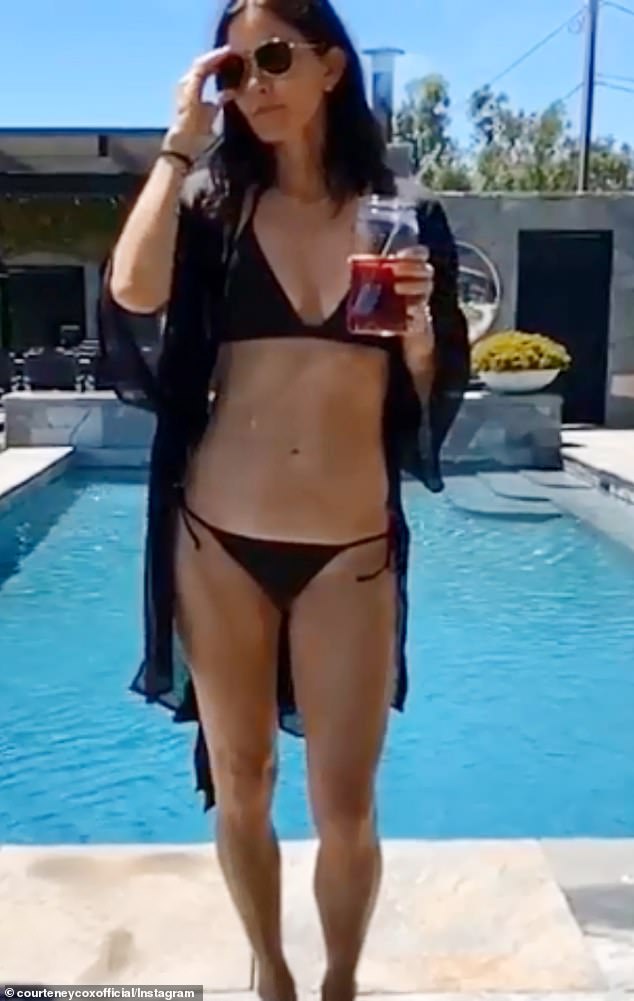 The clip seems to show Courteney jumping out of the pool, though she is miraculously dry when she lands.

It then shows the star artfully putting her sheer kaftan and sunglasses back on, as cool as a cucumber, while someone hands her a red-hued drink.

Mom-of-one Courteney captioned the gravity-defying video with lyrics from one of Missy Elliott’s most iconic tracks, Work It, posting, ‘I finally get what you mean…by put your thing down, flip it, and reverse it’.

Social media users began trying their hand at the impressive, digitally-altered video as soon as two days after Courteney’s own stunt.

The only problem? The users, in their droves, spelled the star’s name incorrectly — thus the ‘Courtney Cox challenge’ has actually taken off.

Alabama-born Courteney notably spells her name like her mother, Courteney Copeland (née Bass) — with an extra ‘e’ in the middle.

Her mom Courteney went on to marry Hunter Copeland, whose nephew is drummer Stewart Copeland of The Police.

But as the copycat videos began turning up on Instagram, many people tagged them with #CourtneyCoxChallenge, leaving out that middle ‘e’.

Courteney’s own video attracted comments from the likes of Big Bang Theory star Kaley Cuoco (who said ‘this is epic’) and her Cougar Town co-star Busy Philipps (who wrote ‘this is great’) — but videos created by imitators still garnered thousands of views in their own right. 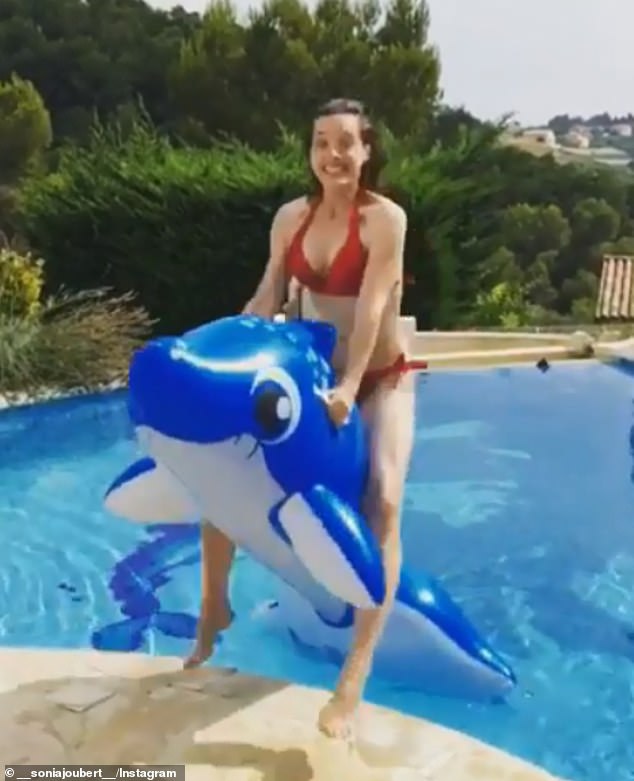 Reenacted: An Instagram user involved her dolphin pool float for her own spin on the challenge 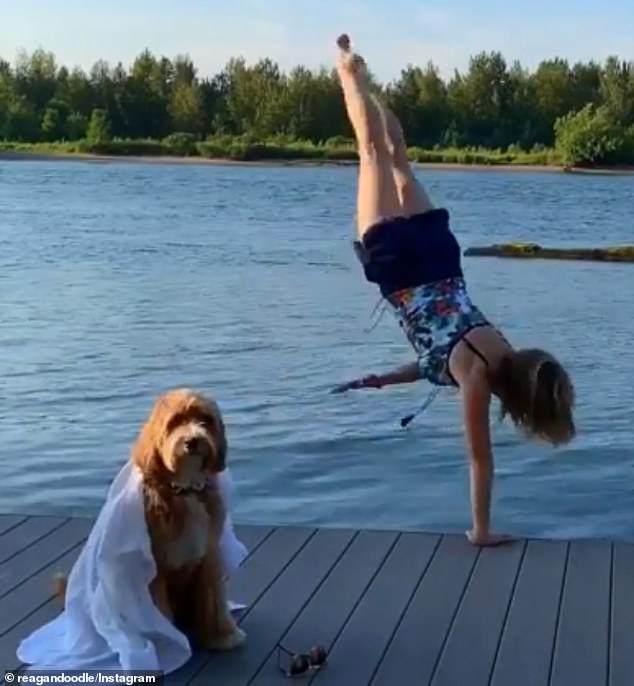 Instafamous: Reagan, the Instagram famous Doodle with 515k followers, even got in on the challenge with his owner 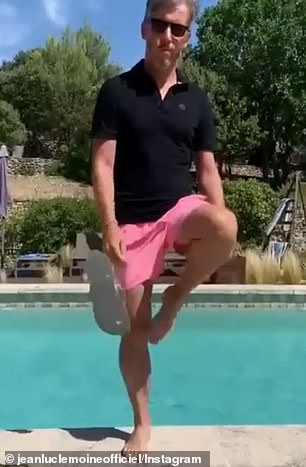 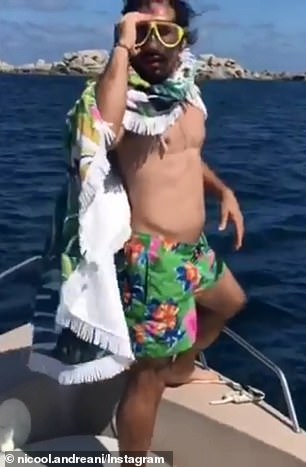 Water ready: Men took a leaf out of Courteney’s book while donning their poolside attire post-jump

So far, over 800 videos have been posted with the misspelled hashtag.

The clips mainly show users jumping into private pools, being handed a glass of wine or bottle of beer and flicking their shades on in reference to Courteney’s original.

French celebrities aside, hilarious videos showed people using props like pool floats and scuba diving goggles for their own renditions. Others did handstands or group reenactions, some even involving their kids wearing arm bands.

An Instagram-famous pet, Reagan the Doodle, even partook in the challenge — well, at least watching his owner do so. 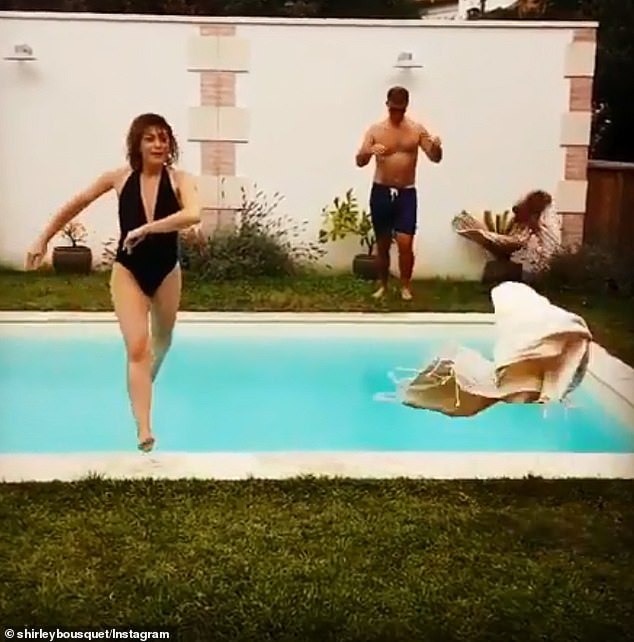 Joint effort: A couple showed their synchronized skills as they pulled off a perfectly-timed double Courteney Cox challenge 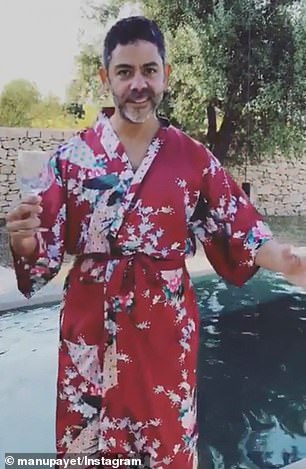 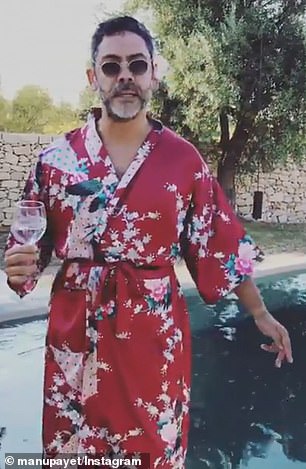 Joke: Comedia Manu Payet helped to popularize the trend when he posted his own version – which didn’t see him get anywhere near the pool behind him

Courteney has been delighting her three million Instagram followers with humorous clips and pictures as of late.

The actress partook in the recent viral FaceApp challenge, showcasing what she could look like in another few decades.

Friends fans were also thrilled at an upload earlier this summer, in which Courteney posed with the show’s other stars Lisa Kudrow and Jennifer Aniston.

Courteney also posts no shortage of pictures with her Irish rocker beau Johnny McDaid, whom she has been in a relationship with for five years. 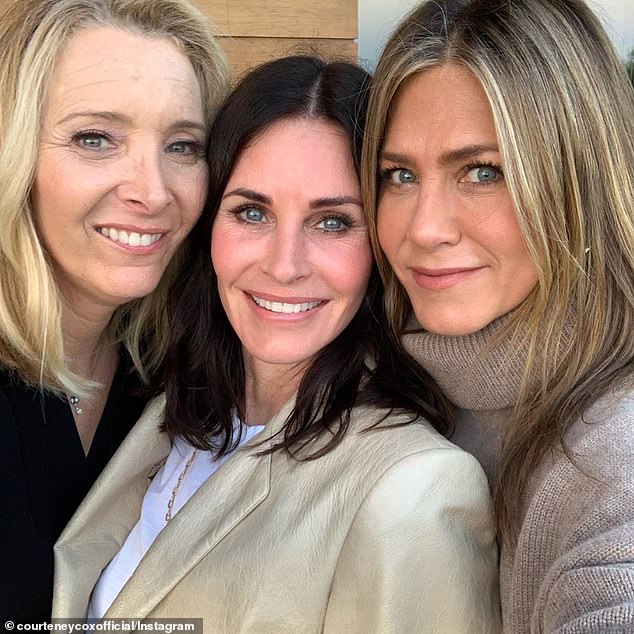 The Dirt star trolled herself yesterday when she took to Instagram to share an old magazine clip of herself.

The page features an 80s-era Courteney in a strapless halter top with whispy bangs next to a quote the actress gave about Madonna.

‘There are a lot of personalities out there, like Madonna, who can set their own style. It’s outrageous. I don’t know if I could do it, but she displays a great sense of personal style,’ the magazine clipping reads.

HOW TO GET YOUR FRONTAL TO LOOK LIKE SCALP! ft. ALIEXPRESS ISEE HAIR | Coco Chinelo

How to Get Soft Hair