Ivanka Trump took a break from her White House duties to celebrate her husband Jared Kushner in a gushing Instagram post shared in honor of Valentine’s Day.

The 38-year-old described her fellow senior White House advisor as ‘my love, my champion, my rock, my Valentine’ while sharing a black-and-white image of the couple that shows Jared gazing lovingly at his wife.

As well as posting the snap on her main Instagram account, Ivanka also posted the picture to her Instagram Stories along with the same caption to ensure maximum exposure. 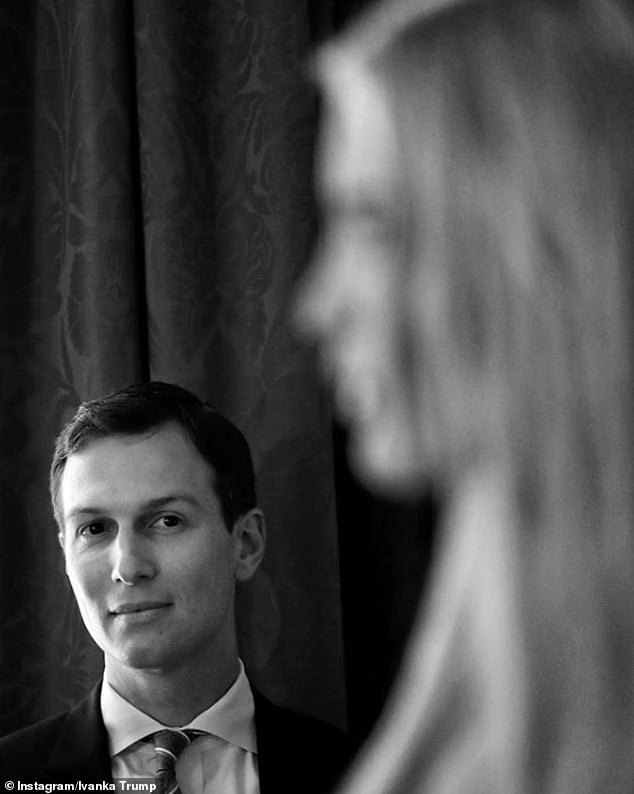 Romance: Ivanka Trump shared a sweet tribute to her husband Jared Kushner in honor of Valentine’s Day on Friday, referring to him as her ‘rock’ and her ‘champion’

This year’s holiday is the 11th Valentine’s Day the couple has celebrated together as husband and wife; Ivanka and Jared tied the knot in October 209, and have three children together: Arabella, eight, Joseph, six, and Theodore, three. 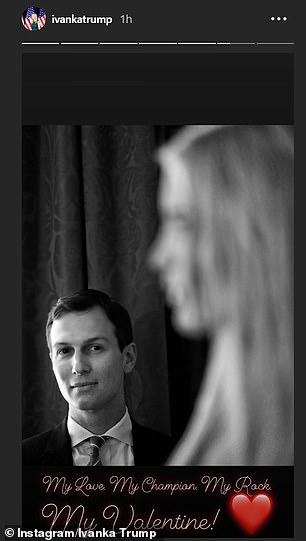 The post comes at the end of a busy Instagram week for Ivanka, who has been known to go weeks without sharing any updates on social media.

However, it seems she has had a lot of things to say to her followers over the past few days, in addition to her sweet Valentine’s tribute.

On Wednesday, the first daughter celebrated the first anniversary of her women’s prosperity initiative, co-hosting an event at the White House with Secretary of State Mike Pompeo.

There, she proposed new legislation that would make the economic empowerment of women a priority of U.S. foreign policy and ensure that her pet project, the Women’s Global Development and Prosperity Initiative, continues beyond the Trump administration.

It would also establish an Office of Women’s Empowerment at the State Department, and has been packed by two bipartisan senators: Lindsey Graham, a South Carolina Republican, and Jeanne Shaheen, a New Hampshire Democrat, as well as Pompeo.

Separately, Ivanka announced that the W-GDP initiative has reached 12 million women around the globe in the year since it was launched in February 2019. 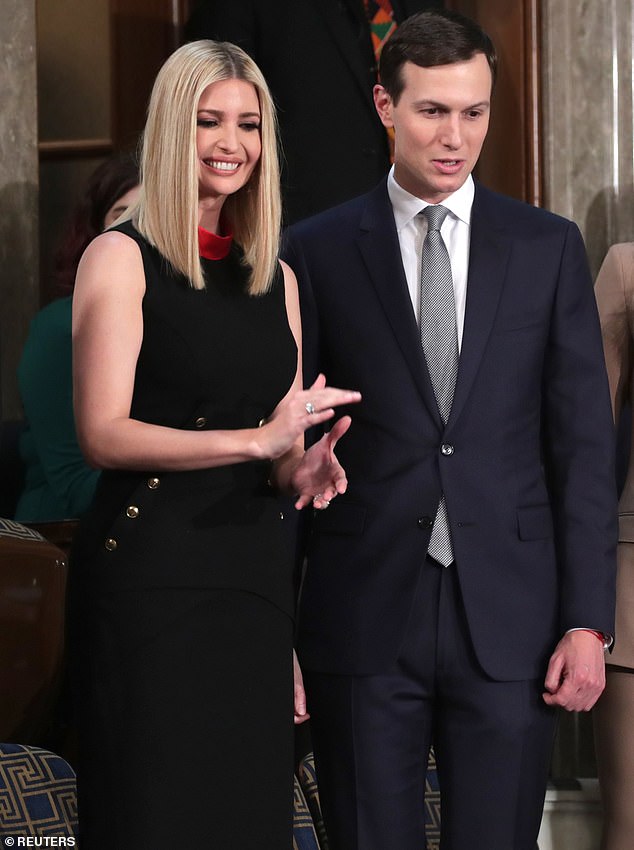 Celebration! This is the 11th Valentine’s Day the couple has celebrated together as husband and wife 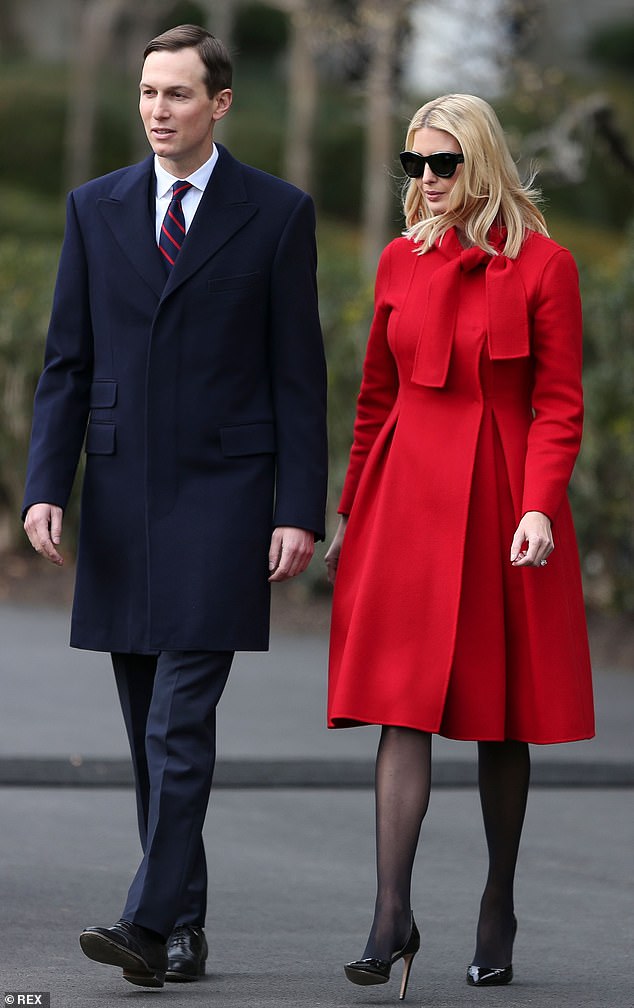 Memories: Ivanka and Jared, who are pictured together at the White House in January, tied the knot in October 2009 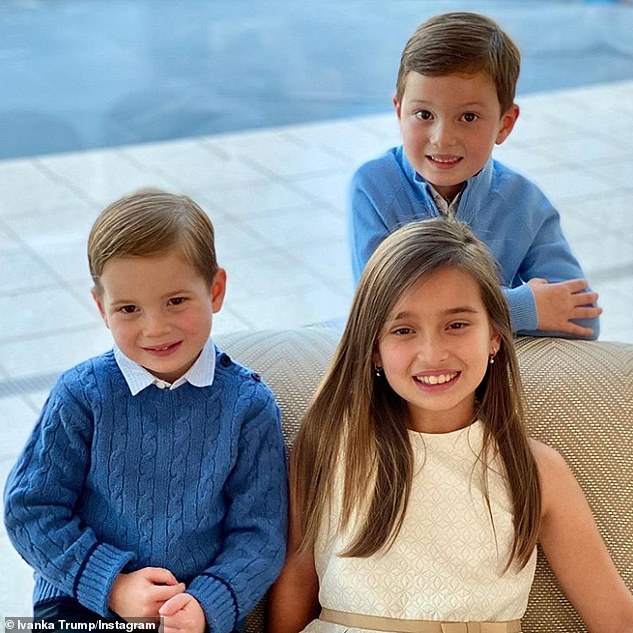 Ivanka celebrated the one-year anniversary of the initiative by debuting a bold new hairstyle as she left her Washington, D.C. home, showing off some bright blonde highlights as she made her way out of the home she shares with Jared and their three children, before stepping into a waiting SUV.

But while her new ‘do certainly took center stage, Ivanka’s ensemble was not to be ignored; the Senior White House Advisor modeled a $1,850 pleated Max Mara dress with a demure blouse-style top.

The chiffon dress featured a mock-neck with an elegant tie, while the pleated skirt was nipped in at the waist with elastic, allowing Ivanka to show off her curves.

Clearly keen to pull out all the stops in celebration of the W-GDP’s anniversary, Ivanka also modeled a glamorous makeup look, showing off long lashes, a pretty pink lip color and a smokey eye.

Her newly-highlighted hair was left sleek and straight around her shoulders, allowing her to show off the new style to full effect.

Not long after departing her Kalorama home, the first daughter took to social media to mark the W-GDP’s first anniversary, sharing a video on Instagram Stories, before writing on Twitter: ‘Happy Birthday W-GDP!’ 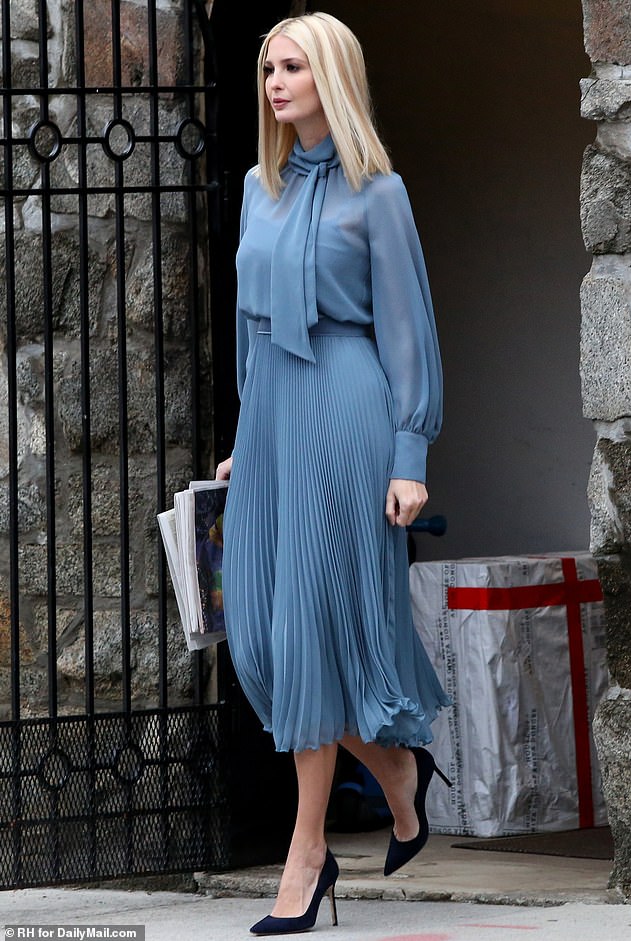 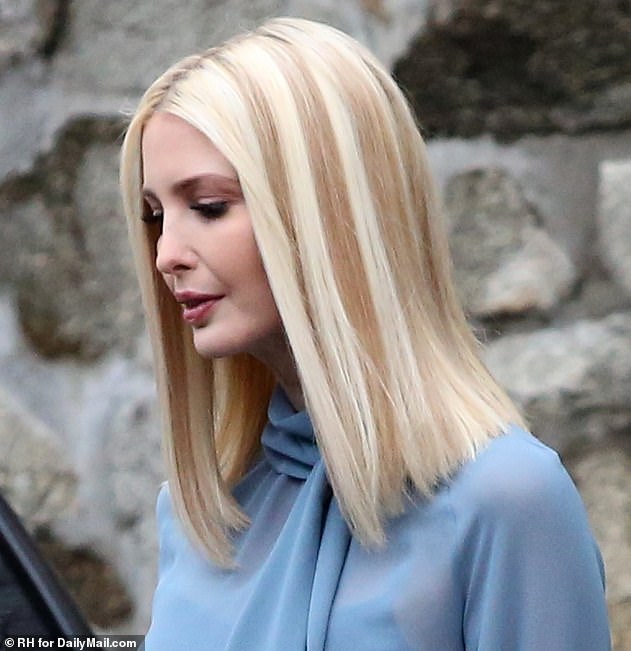 New hair, don’t care! Ivanka had clearly been to the salon since last stepping out in public, and she happily showed off new chunky blonde highlights 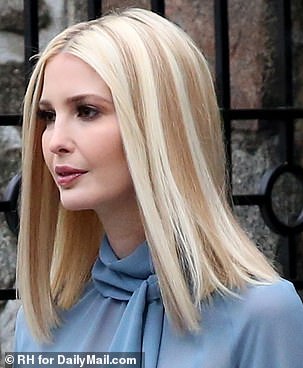 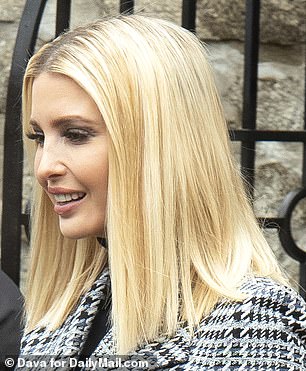 Something different: The Senior White House Advisor’s hair was styled in much the same way as it was last Monday (right), however the color was markedly different 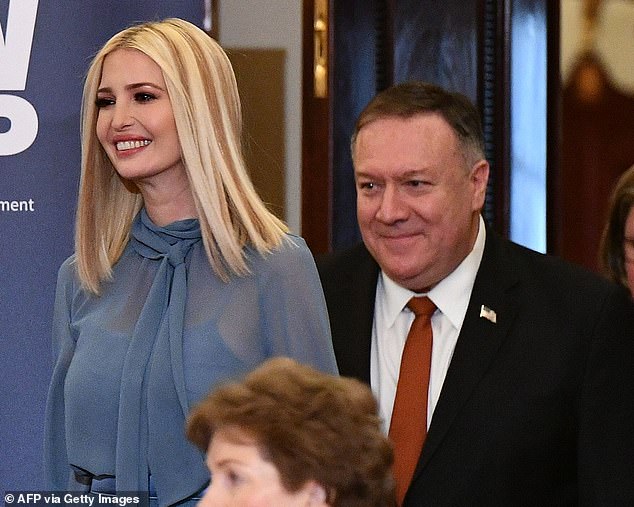 Co-hosts: Ivanka and Secretary of State Mike Pompeo chaired an event held in honor of the anniversary on Wednesday morning at the White House

Ivanka was not the only one to mark the first anniversary of the initiative; she and Secretary of State Mike Pompeo co-hosted an event celebrating the milestone at the White House on Wednesday morning, with the pair paying tribute to all that has been achieved thanks to the W-GDP so far.

While welcoming guests to the event, Ivanka also announced new bipartisan legislation on W-GDP that will help to empower women economically in emerging countries.

It’s likely that Ivanka has been working away tirelessly on this legislation behind the scenes; she’s kept a rather low profile since last week, when she was last pictured out and about in public.

On Monday, Ivanka was seen leaving her D.C. home with colleague Julie Radford before flying to New Hampshire with Vice President Mike Pence.

At the time, the first daughter wore a $2,260 black and white checked coat dress by Suzannah over a black turtleneck. She topped off her outfit with a black belt that cinched her waist and a pair of lace-up black boots.

Ivanka seemed to be excited to head to New Hampshire on the eve of the primary, and the day before the trip, she took to social media to post throwback photos from when she and her family visited the state in 2016.

The first daughter had a bright smile on her face when she left the front gate of her home with her friend Julie on Monday morning.

She looked ladylike in her black and white woven frock that was inspired by a vintage hunting coat, according to the London brand’s website.

The long-sleeve coat dress features a flattering circular skirt that falls right below the knees and black velvet buttons that run down the front.

Her hair was not quite as bright as it was on Wednesday after her latest salon session, however the style was very much the same; she wore her poker-straight blonde hair loose around her shoulders and sported smokey eye makeup and a natural-looking lipstick.

Ivanka carried a black leather handbag in her hand as she and Julie walked just a few steps to get to the Secret Service vehicle that was parked in front of her home.

She returned to Instagram ahead of their flight to post a photo of herself on the tarmac with Julie right before they boarded their flight.

‘My amazing friend and colleague Julie Radford is back from maternity leave and ready to roll!’ she wrote. ‘Her 1st day back and we’re headed to New Hampshire with @VP! #primaries.’

It seems the first daughter enjoyed a relaxing weekend at home with her three children before her travels. 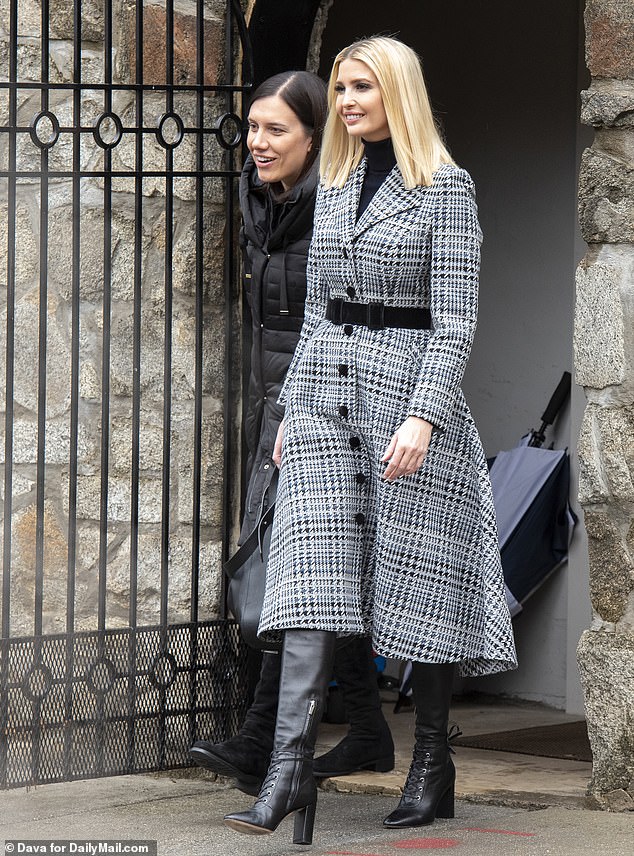 On the go: On Monday, Ivanka was seen leaving her Washington, D.C. home with her colleague Julie Radford before she flew to New Hampshire with Vice President Mike Pence 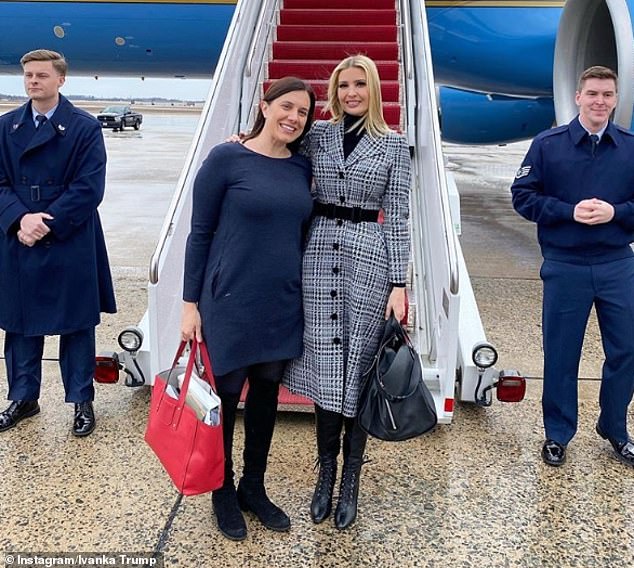 All smiles: Ivanka took to Instagram ahead of their flight to share a photo of herself with Julie, revealing it was her friend’s first day back to work following her maternity leave 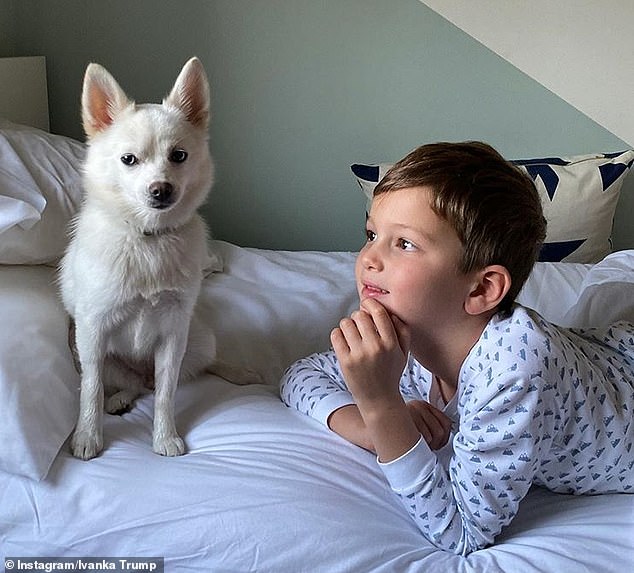 Hanging out: On Sunday, Ivanka shared a sweet snapshot of her six-year-old son Joseph gazing at their fluffy white dog, Winter, while lying on his bed in his pajamas

She shared a sweet snapshot of her six-year-old son Joseph gazing at their fluffy white dog, Winter, while lying on his bed in his pajamas.

Ivanka has been more active on social media in the past few weeks than she usually is, and that may have something to do with her father’s acquittal following his Senate impeachment trial.

The first daughter joined the president, first lady, and their supporters in the East Room of the White House on Thursday as Trump gave a caustic victory speech in which he thanked his family and called out the ‘leakers and liars’ he blamed for impeaching him.

Ivanka, who was dressed modestly in a black turtleneck and a slate gray pantsuit, stepped on stage to give her father a big hug.

Last Wednesday, the Republican-controlled Senate voted to acquit Trump on charges brought by the Democratic-led House of Representatives, only the third time in U.S. history that a president has been impeached.

Ivanka celebrated the news by taking to Instagram to post a throwback snapshot of herself giving two thumbs up while wearing a red, white, and blue USA knit hat at the 2018 Winter Olympics in PyeongChang, South Korea.

She wrote ‘#Mood’ and added an American flag emoji while captioning the image.

The first daughter shared the snapshot on her Instagram Stories along with a message slamming her father’s impeachment trial.

‘This factional fever and incoherent, ill-conceived process has finally ended and the President has rightfully been acquitted,’ she wrote.

‘It is time for our Country to move forward. Together. POTUS has accomplished so much and is just getting started.’

She also posted photos of the covers of The New York Times and The Washington Post that announced the president’s acquittal.

View All
Makeup Tips And Tricks

This Trick Will Change Your Makeup Game!

“Conditioner Causes Hair Fall”?! Reacting To A Video Made About Me | Mrs. Mississippi Review