An online English teacher has shared her tips on how to sound confident and intelligent when speaking.

Lucy Bella Earl, 25, from Hertfordshire, runs the ‘English with Lucy’ YouTube channel which has amassed 2.5 million subscribers since January 2016.

In a recent video, Lucy highlighted to viewers the two common slip-ups that people should avoid when speaking: upward inflection, and the overuse of the word ‘like’.

‘They make people sound dumb and unintelligent when they speak, without them even realising it,’ Lucy said.

Warning of the long-term impact of falling into bad habits, she added: ‘If you do one of these things in a job interview, it has actually been proven that it decreases your chances of getting hired.’ 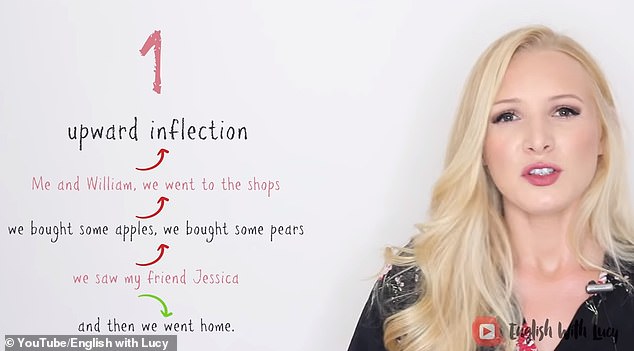 Lucy Bella Earl, 25, from Hertfordshire, runs the ‘English with Lucy’ YouTube channel. She highlighted the two habits that make you sound ‘dumb’, including an upward inflection (above)

Upward inflection is when declarative sentence clauses end with a rising pitch intonation, as you would a question, Lucy explained. 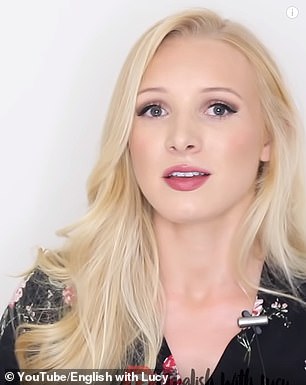 The teacher said that while it is most commonly heard in American accents, upward inflection is increasingly seeping into British English.

This is partly due to the impact of US films and TV shows, with Brits subconsciously emulating the language of their favourite characters.

However she noted it is also commonly used on screen to indicate a character is less intelligent and warned against falling into the habit for this reason.

Lucy also pointed out that upward inflection is common with non-native English speakers who add in the questioning tone to indicate they are not ‘100 per cent sure’ in whether the sentence was grammatically correct.

Once again, it should be avoided for this reason, particularly in formal settings like job interviews or in the office as ‘it shows your insecurities about your language skills’. 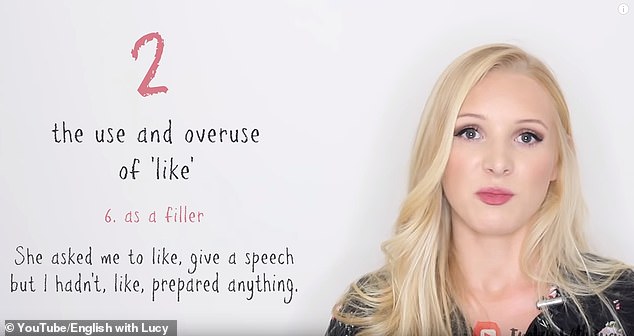 The second common factor of speech that makes people sound ‘unintelligent’ is the overuse of ‘like’ when speaking, Lucy explained. Above, she highlights how it’s used as a ‘filler’

The second common factor of speech that makes people sound ‘unintelligent’ is the overuse of ‘like’ when speaking, Lucy explained.

The language teacher said that while there are plenty of legitimate reasons for using ‘like’ in speech, people could easily fall into the bad habit of relying on it as a ‘filler’.

When used incorrectly, it can come across as being ‘disinterested’ or ‘nonchalant’ about what you are saying.

She added: ‘I would highly suggest avoiding using “like” as a filler because it ends up sounding really, really juvenile.’

22 HACKS EVERY GIRL NEEDS TO KNOW