A California couple was flying home with their newly-adopted newborn baby when two flight attendants threw them an impromptu baby shower on the plane — and dozens of passengers pitched in.

On November 9, Dustin Moore, 33, and his wife Caren, 35, were traveling home from Colorado on Southwest Airlines with the eight-day-old daughter they’d just adopted, after nine months of trying for a baby.

When a pair of flight attendants learned about the happy circumstances of the trip, one got on the intercom to congratulate them, inviting the other passengers to write messages to the new parents on napkins for them to take home. 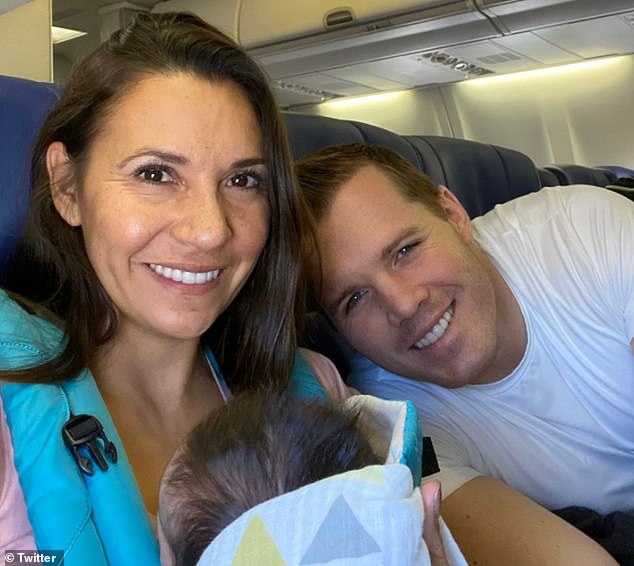 Heartwarming story: Dustin Moore and his wife Caren were traveling home from Colorado on Southwest Airlines with the eight-day-old daughter they’d just adopted on November 9 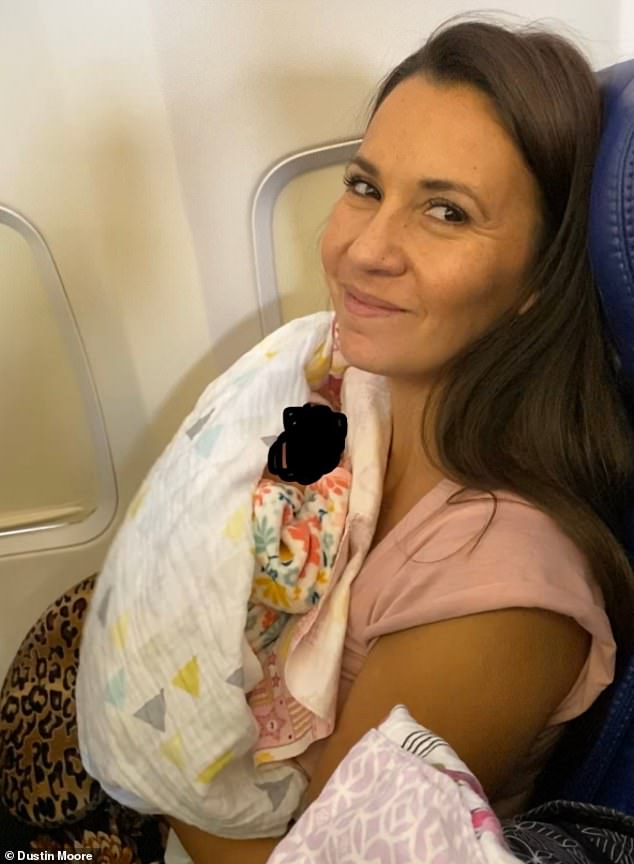 So sweet: A pair of flight attendants invited everyone on the flight to write messages to the new parents for the occasion

‘Not too long ago, my wife and I boarded a Southwest Air flight with our recently adopted infant daughter,’ he began.

‘[With] clearance to return home to California, my wife carried our precious bundle, while I offered numerous apologies to passengers while maneuvering the aisle with 4 bags.

‘About mid flight, our daughter awoke and politely informed us she wanted a new new diaper. After inquiring about space for a table change, a thoughtful flight attendant (named Jenny) cleared a space in the back of the plane and gave us privacy.

‘After a change, Jenny and another passenger complimented my beautiful daughter and politely asked what had prompted a flight with such a young infant.

‘I gave them the shortened adoption story, to which they hastily offered congratulations, and shared a few more kind remarks,’ he wrote. 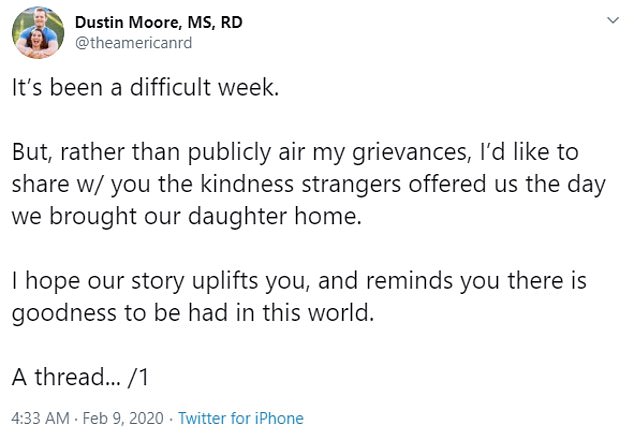 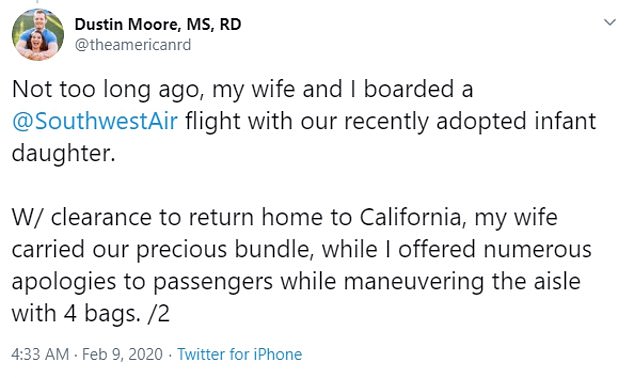 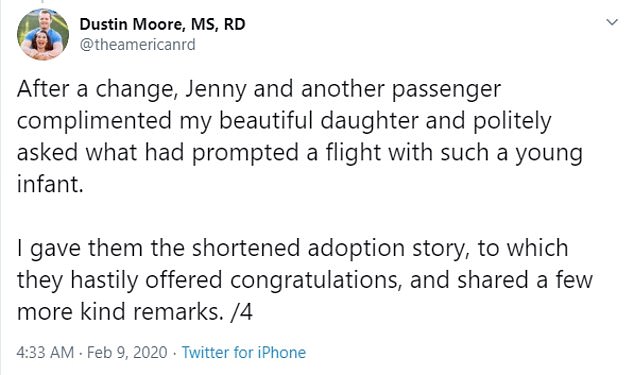 Just melting! Dustin shared the story on Twitter, recalling how they were going home to California with their daughter when a flight attendant learned why they were traveling

As it turns out, Jenny did more than offer congratulations — she also told fellow crew members about it.

‘About 10 minutes later, another attendant (named Bobby) greeted us w/ a warm smile, and inquired about our daughter,’ Dustin went on.

‘We repeated the story w/ a few details, and he congratulated us before walking away. My wife and I exchanged curious looks, but thought nothing more about it.

‘Then, we heard the intercom. The attendant Bobby came on and announced a special guest on the flight. Our daughter,’ Dustin wrote.

Bobby announced: ‘She’s just been adopted by her parents Caren and Dustin, and is making her way home.’

‘The entire cabin erupted in cheers and applause,’ Dustin recalled.

‘[Bobby] then shared that the crew would pass out pens and napkins to everyone, and anybody who wanted to share a word of advice or encouragement for our family was welcome to do so. 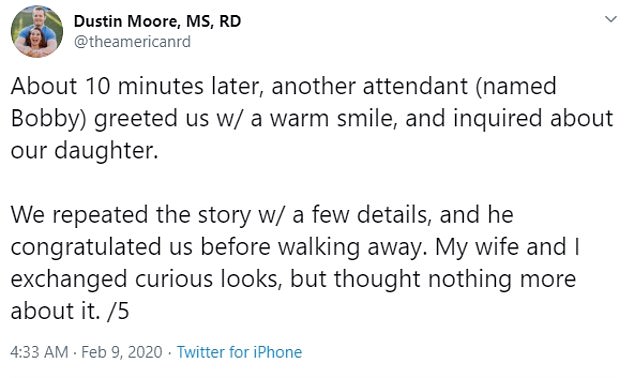 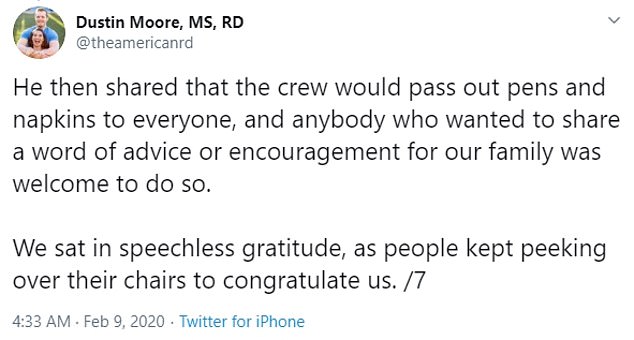 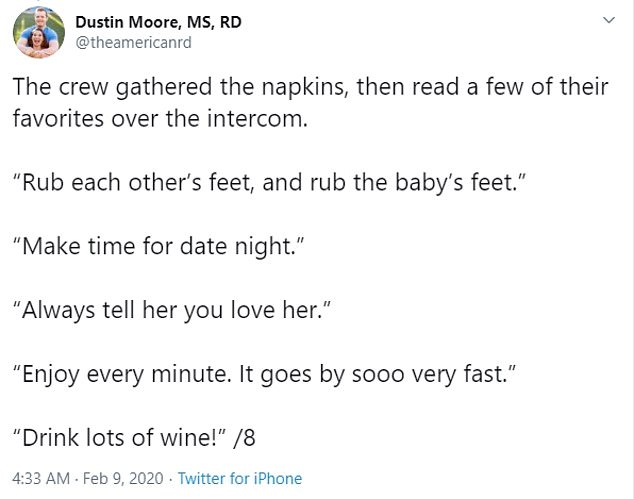 Spreading joy: One of the flight attendants made an announcement, inviting passengers to write notes on napkins

‘We sat in speechless gratitude, as people kept peeking over their chairs to congratulate us. The crew gathered the napkins, then read a few of their favorites over the intercom.’ 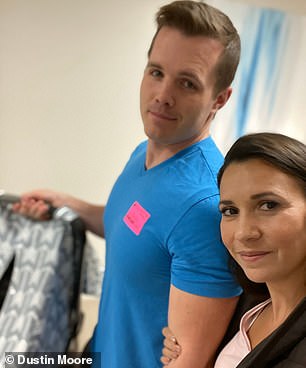 ‘The outpouring of love from that flight … it exceeds my ability to describe what it meant to us,’ Dustin said

Some of the highlights included, ‘Rub each other’s feet, and rub the baby’s feet,’ ‘Make time for date night,’ ‘Always tell her you love her,’ and ‘Enjoy every minute. It goes by sooo very fast.’

‘Drink lots of wine!’ inspired a round of cheers.

‘Then, Bobby and Jenny approached us with the napkins bundled up (about 60 of them), w/ a set of pilot wings for our daughter,’ Dustin said.

‘We learned they were married, and that someone had done a similar act for them on their honeymoon flight.

‘When I had spoken w/ Jenny, she thought it was a perfect opportunity to pay forward the kind act they had been shown on their honeymoon.

‘Even as we disembarked, people kept approaching us and wishing us well, and complimenting our beautiful daughter. Our hearts were full.’ 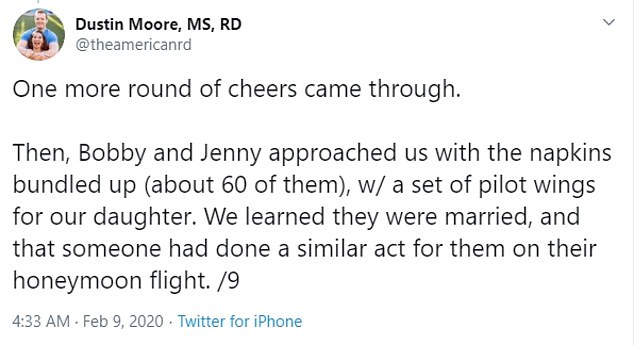 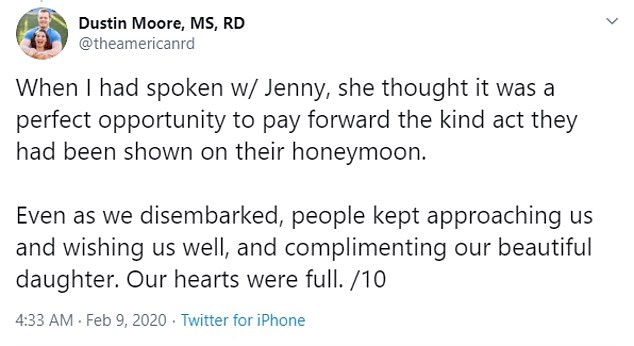 ‘We sat in speechless gratitude, as people kept peeking over their chairs to congratulate us,’ Dustin said

Dustin said that the experience was especially poignant because of the ’emotionally tender state’ he and his wife were in, after nine years of trying unsuccessfully to have a child and finally getting one.

‘The outpouring of love from that flight, brought on by the actions of two thoughtfully observant flight attendants… it exceeds my ability to describe what it meant to us,’ he said.

‘How much those wings and written notes uplifted two new parents determined to love their new daughter.’

‘I hope you’ll take time to share what is good. In a world of turmoil, don’t forget to showcase the Bobby’s and Jenny’s, the kind strangers out there. And if they don’t cross your path, be one. Seek good, or create it. 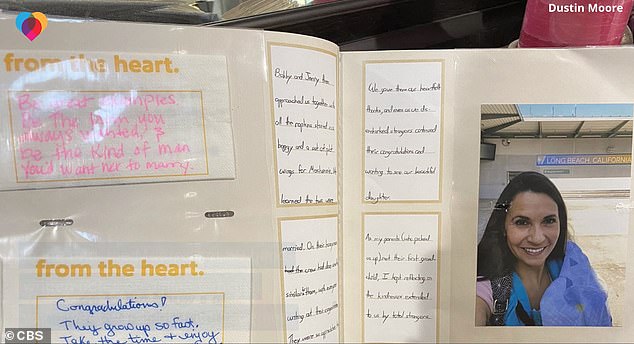 Worth holding onto: They saved the napkins, about 60 in all, and Dustin’s mother put them in a photo album 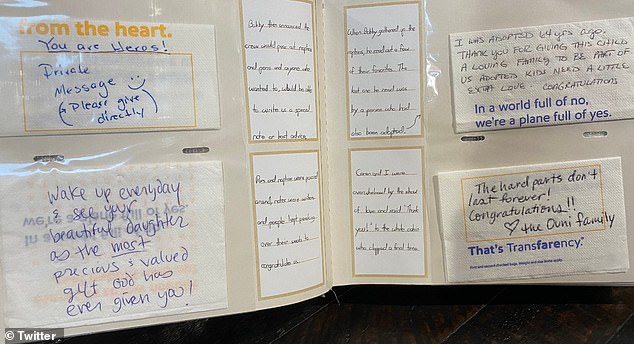 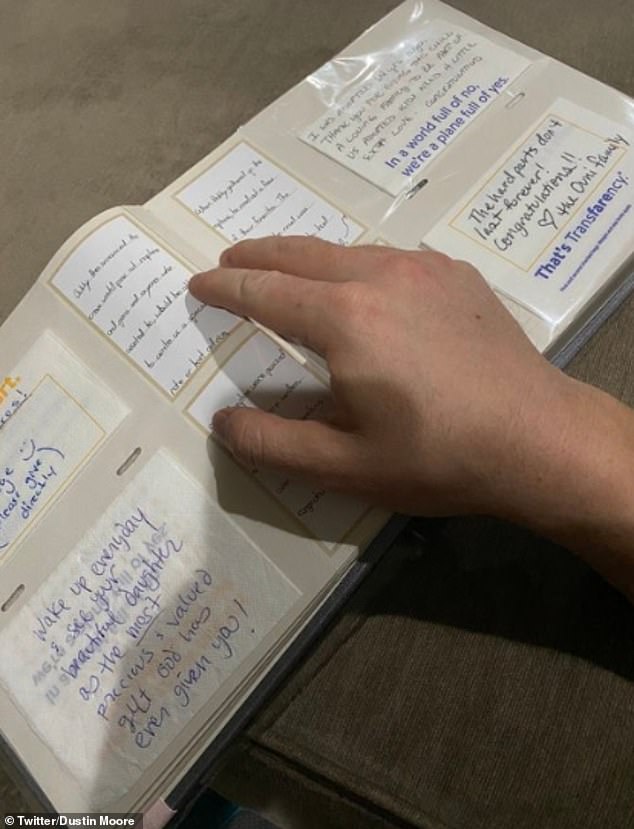 Dustin said: ‘Even as we disembarked, people kept approaching us and wishing us well, and complimenting our beautiful daughter. Our hearts were full’ 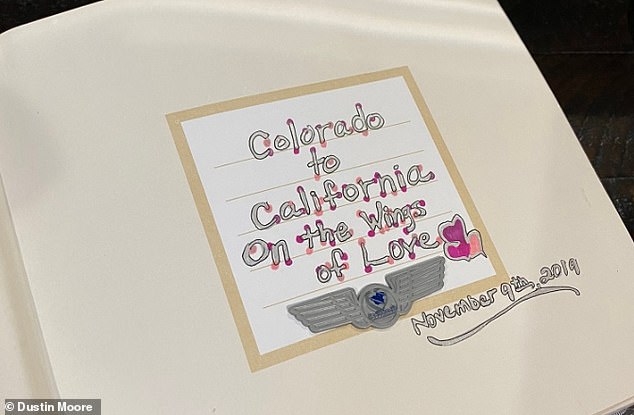 ‘I hope our story uplifts you, and reminds you there is goodness to be had in this world,’ he said

‘I hope our story uplifts you, and reminds you there is goodness to be had in this world,’ he said.

The story as certainly uplifting for the thousands of other Twitter users who liked it.

Dustin also showed off the photo album his mother put together once they got home, including all the napkins with heartfelt messages.

One was from a passenger who was adopted 64 years ago.

‘Thank you for giving this child a loving family to be part of,’ the passenger wrote. ‘Us adopted kids need a little extra love. Congratulations.’

Dustin told the Washington Post that he still gets choked up thinking about what happened.

‘For an entire crew of strangers to come together like that, to partake like that, to show us that kind of love and kindness meant everything to us,’ he said.

He and Caren are also loving being parents to their three-month-old.

‘It’s just amazing having a daughter,’ he said. ‘All the little details that are mundane to other people are amazing to us. When she burps, we’re like, “What an accomplishment!” It was a long, long wait for her, but every minute we had to wait was worth it.”

HOW TO GET YOUR FRONTAL TO LOOK LIKE SCALP! ft. ALIEXPRESS ISEE HAIR | Coco Chinelo