Singer Fleur East always wanted a fairytale wedding with a puffy dress and an implausibly handsome prince to sweep her off her feet.

Mind you, she wasn’t daft. When she was a little girl, her mother, who idolised Princess Diana and wept buckets when she died, used to say Fleur could marry Prince William.

‘She had it all planned. I’d marry William and live in the palace, and she could come for tea. I thought it was hilarious.

‘I’d say, “Mum, I’m mixed-race. I’m from Walthamstow. On what planet could that even happen?”’

In June, though, Fleur got her own fairytale wedding, to fashion designer Marcel Badiane-Robin. 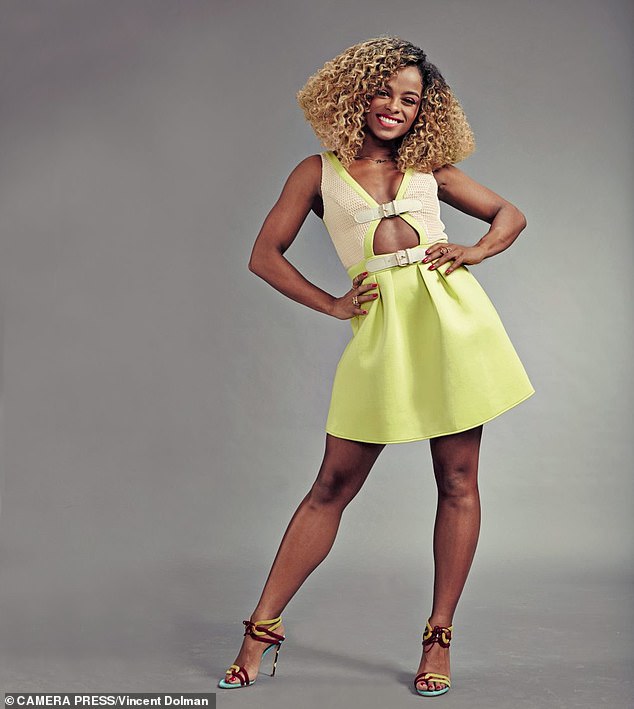 Fleur East, 31, (pictured) from Walthamstow, who found fame after appearing on the X-Factor,  revealed how the show changed her life

He pulled out all the stops for the proposal, whisking her to Tokyo. ‘He tricked me. We looked at engagement rings in Tiffany at the airport.

‘I thought he was maybe building up to asking, but he already had the ring.

‘We walked into the hotel room and there were rose petals and champagne, and I said, “This is a bit OTT if they do this for every couple.”

‘But when I looked round he was down on one knee.’

She said yes, of course. They’d been together for nine years so it was hardly a whirlwind.

The wedding was in Morocco and guests included celebrities who Fleur, 31, had met on her epic journey around the world of reality TV.

This is a woman who, after all, came to fame via not one but two appearances on The X Factor – once in 2005 with a girl band when she was just 17, and again in 2014 when she was runner-up.

She also appeared on last year’s I’m A Celebrity, and guest of honour at her wedding was her jungle sidekick Harry Redknapp, who made the journey with his wife Sandra.

This friendship is quite bizarre, but it seems Harry and Fleur really did bond over those creepy-crawlies. 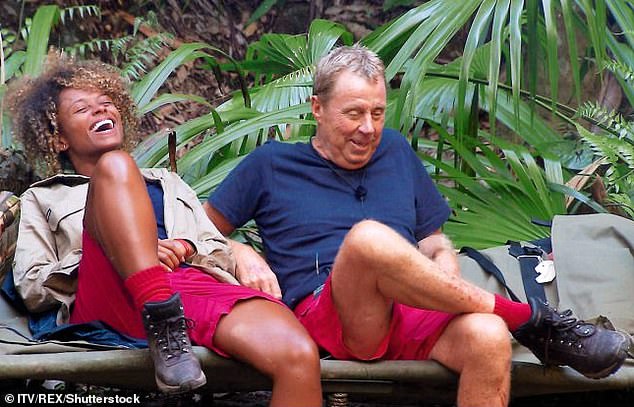 Fleur revealed Harry Redknapp was guest of honour at her wedding in Morocco. The pair met and became friends on I’m A Celebrity… Get Me Out Of Here! (pictured)

‘Harry has become a great friend,’ she says.

‘He was brilliant at the wedding. He was the wine-waiter for his table, keeping everyone topped up. And he kept conversation going. You can’t not get on with Harry.’

Did he know who she was when they entered the jungle – and vice versa? ‘I didn’t have a clue. I don’t follow football.

‘And he didn’t have any idea who I was either, but that was part of the fun.

‘You’re just thrown together with people. We hit it off, though.

Harry was the wine waiter at my wedding, keeping everyone topped up. And he kept conversation going. You can’t not get on with Harry

‘He’s the most solid, lovely guy, no side to him, completely genuine and unaffected by fame.’

We meet in Manchester, where Fleur has returned from her honeymoon and hurtled straight into a new job as a morning presenter on Hits Radio.

Quite a departure? Not really.

Between The X Factor appearances she went to university and completed a journalism degree, which involved some broadcast work.

The music background helps, of course. As does the fact she has a morning radio personality – eternally upbeat.

She’s a chipper soul, enthusiastic about everything, even her new security pass.

‘Everyone thinks I’m nuts, but you have no idea how excited I am about this.’

The early mornings? Less so. ‘I still have to set five alarms to get me up, but so far I’m loving it,’ she says.

‘I get to chat and play great music. It was just another door that opened for me, and so I went for it. 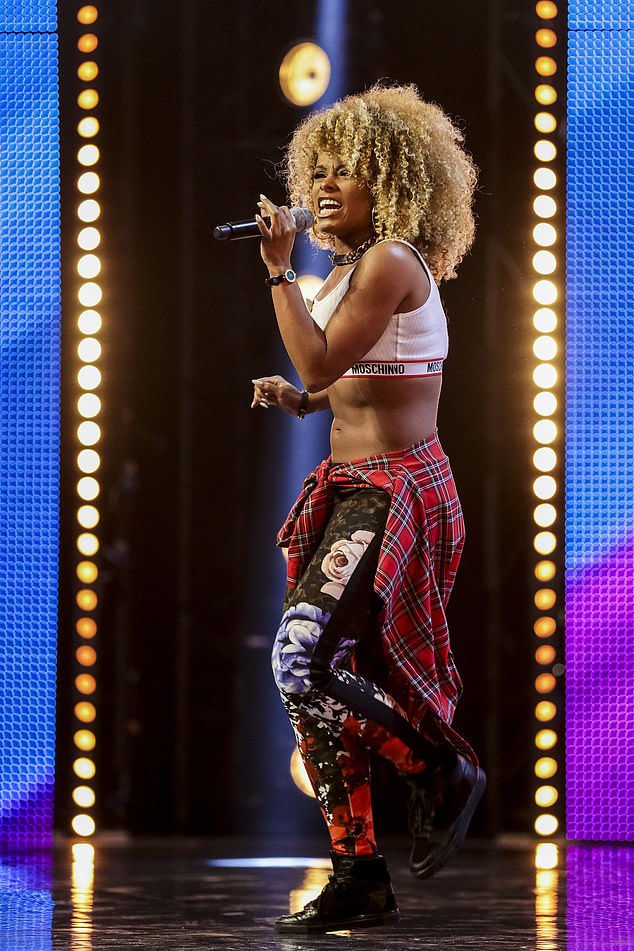 ‘It still allows me to record my own music as well, so it’s the best of both worlds.’

Last year she and Marcel bought their first home together.

Fleur says she always knew that the fruits of The X Factor might not be lifelong.

‘I didn’t go mad when it all took off. I wanted to be sensible and put money into property.

‘There’s a great satisfaction knowing that, even if it all ends tomorrow, you’ve done OK.’

People assume that once you’ve had success on The X Factor, you’ll have a La-La lifestyle for life.

‘As soon as you’ve had success and you’re actually making decent money, people do give you things like clothes.

‘Which is exactly the point – you don’t need them.

‘The second time I did The X Factor I was older, more clued up. First time round? Thank God it didn’t happen for me.

‘If I’d had One Direction-type success then, I’d probably have gone off the rails. I don’t think I’d have been able to cope.’

In 2014 though, there was a particular X Factor performance that stood out for viewers – Fleur’s barnstorming version of Mark Ronson’s Uptown Funk.

It was an unknown song then, and so much interest did her version generate that Ronson had to rush out his single, which featured Bruno Mars. 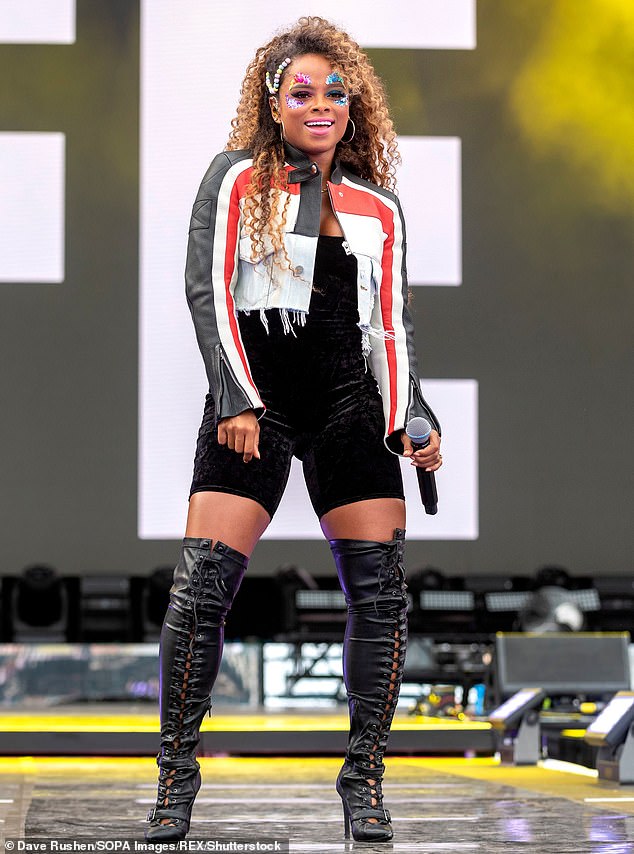 Fleur (pictured) who had success with her first single Sax, confesses she became frustrated with watching other acts dominate the charts while she was signed to Syco Music

Well, no. If any showbiz career illustrates how fickle this world can be, then perhaps it is Fleur’s.

She had huge success with her first single Sax, and her album Love, Sax And Flashbacks went to number 14 in the charts.

Then things went wrong. For a year she slogged away, but her bosses didn’t feel the material was good enough. She disagreed.

‘There was some great stuff. Maybe not the same style as Sax, but it was such a unique song that you couldn’t replicate it.’

She became frustrated at watching other acts dominate the charts – some also on the Syco label.

She likens it to being signed by a top football club, yet finding yourself on the bench.

‘It’s frustrating, definitely. You just want to be out there, but if they don’t agree… Eventually, I had to steel myself to call them and ask for a meeting.

‘It was a huge deal. I mean, who does that, but I couldn’t see any other option.’

It was mutually agreed there should be a parting of the ways, so in October 2017 she left the label.

‘It was all amicable. No one fell out. It happens in this business. You just never can tell.’

View All
Fashion Tips For Girls